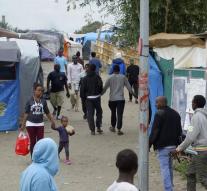 london - France and Britain going to a 4 meter high wall drop along the main access road to the ferry in the French port of Calais. This was announced by the British Minister for Migration Robert Goodwill, British media reported Wednesday.

The wall must stop refugees onto trucks that long ride to ride to Britain. Truckers on Monday held a protest action against the nuisance of migrants.

The two countries attract 17 million for a package of measures with the wall as the most eye-catching part.,, We did it with fences, now we do it with a wall, '' said Goodwill. The wall is on both sides of the road, the Rocade, and is one kilometer long. The building still starts this month.