Home / World / Huge support for May at local level 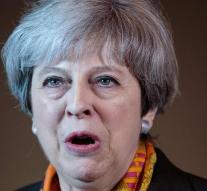 london - The Conservative Party of Prime Minister Theresa May has made a big victory at the local elections in England, Scotland and Wales. A total of over 550 seats were won and the 'Tories' now expires in 1882 of the total of 4851 seats.

The biggest opposition party Labor lost 380 seats and now has 1152. Greatest loser is the UK Independence Party (UKIP). The pro-Brexit party, scored four years ago, loses 143 of the 144 seats, leaving only one left.

Because of this outcome, the Conservative Party has the say in 28 congregations. There are eleven more than four years ago.

The Conservatives also won in Scotland. However, the Scottish National Party (SNP) remains the largest with 431 seats, although there was a loss of seven seats compared to four years ago. As a result, the SNP loses control of Dundee, one of the few cities that voted in 2014 at the United Kingdom separation referendum.

The local elections are seen as a good indication of the outcome of the parliamentary elections scheduled for next month. If the national elections had been, the Conservatives would have received 38 percent of the votes. Labor would be good for 27 percent, Liberal Democrats for 18 percent. UKIP would reach 5 percent.