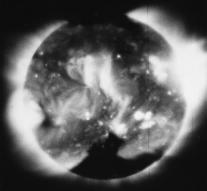 lund - The earth has been affected in the Middle Ages twice by massive solar flares, charged particles the sun hurls into the universe. That happened around the year 774 and about 993. The traces of which are found in layers of ice and snow, deep beneath the surfaces of Greenland and Antarctica.

Swedish scientists have studied the ice and publish it on Tuesday in the leading science journal Nature. The solar storm of 774 was at least five times as strong as the strongest storm recorded in recent decades. " If such massive storms now would hit the Earth, they can have a devastating effect on our power, satellites and communications ", the researchers say. It might even have been able to punch a hole in the ozone layer, affecting the Earth's climate.

A solar flare is caused by a magnetic field on the sun. Move such fields. As a result, stress may build up. If this energy is released, the sun hits a cloud of charged particles in the electro-magnetic space. These particles are not dangerous for humans. As they enter the atmosphere, creating aurorae.