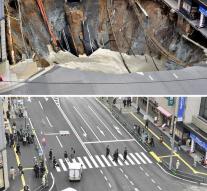 fukuoka - The giant sinkhole swallowed a vijfbaanweg last week in the Japanese Fukuoka, after a week disappeared as snow in the sun. Construction workers were working 24 hours a day to fill the gaping hole. Meanwhile repaired the road and everything seems back to normal.

The gap of thirty meters wide and fifteen meters deep was filled with a mixture of sand and concrete. The task was complicated by the enormous amount of water that flowed into the hole from sewers.

The sinkhole was caused by work on an underground line.