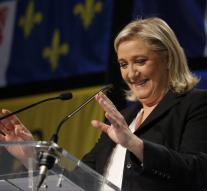 - The anti- EU and anti- immigration Front National (FN) is the largest in France. In the first round of regional elections gained the nationalist front of Marine Le Pen Sunday nearly 30 percent of the vote. Several French media Monday about " le choc (Shock) after the FN Sunday had achieved a historic breakthrough.

The front was the largest in more than six of the thirteen regions in France. The front stands at the door of power, knocked the newspaper. In 2017 there are presidential elections. In the northern region of Nord-Pas-de-Calais Picardie- made ​​party leader Le Pen himself along as party leader and she got 42 percent of the electorate behind him. " The national movement is without doubt the biggest party in France " cheered Le Pen.

Her 26-year-old niece Marion Maréchal-Le Pen won almost the same score in the southeastern region of Provence- Alpes- Côte d' Azur. The second man of the party, Florian Philippot, was himself surprised at the magnitude of his victory. He won in the northeast, in the new Grand Est region, with nearly 37 percent of the vote.

The second political force formed by the Republicans led by former President Nicolas Sarkozy and their allies. They received approximately 27 percent. It is a great disappointment to Sarkozy that he only fails to present itself as the main opposition leader. The ruling Socialists were, as expected, only 23 percent of voters behind him.