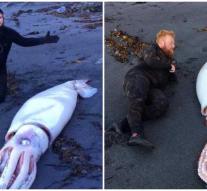 - Three brothers have found a huge squid on the beach of Wellington, New Zealand earlier this week. The giant squid was dead, but still pretty intact.

'The squid was 4.2 meters long,' one of the divers, Daniel Aplin, told the local newspaper the New Zealand Herald. Possibly the big squid was still a lot bigger. He has- so is seen in the images- namely eight arms. But according to biologist Auke-Florian Hiemstra of Naturalis it seems like the tentacles are not found. And they can double the full length of the body of the squid.

How the squid has died is still unclear. The enormous mollusk was transferred to the National Institute of Water and Atmospheric Research of New Zealand on Wednesday.