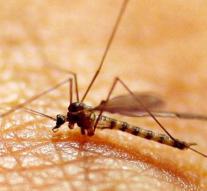 fresno - A giant cloud cloud clouds the streets of the Californian city of Fresno in the coming weeks. That's not a plague but a good thing. The population may hope that by the advent of the swarm in the future, the Aedes aegypti, which will first erupt in the region for the first time in 2013, is finally eradicated. That kind of mosquito can transmit dangerous viruses, such as zika, dengue and chikungunya.

Verily Life Sciences, part of Alphabet Inc., Began Friday releasing the first batch of a total of 20 million specially grown mosquitoes, all male specimens, which nevertheless did not pass. They have been infected with a Wolbachia bacteria harmless to humans for the 'Debug' campaign, which causes them to produce no offspring. After mating, the wild females produce eggs from which a larva will never crawl.

The experts assume that seven Wolbachia mosquitoes are required on each wild male to dump the imminent danger of serious infectious diseases. The project is the largest so far in the US. For example, China, Indonesia and Brazil have been working on this kind of fight for a long time.