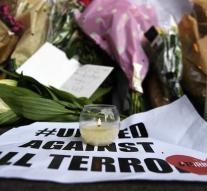 london - Never in Britain have so many people been arrested for suspicion of terrorist offenses. In the period June 2016- June 2017, 379 people were arrested for terrorist activities. That is 68 percent more than in the twelve months before.

It is also the highest number since it has been updated since 2001, according to the numbers published by the British Ministry of Internal Affairs on Thursday. About 90 percent of the terrorist suspects who are arrested are Muslim or have an Islamic background. About one third of the terrorist suspects are actually charged with a criminal offense.

During the period that the Ministry exposed, 62 people were convicted of terrorism or related crimes. This year, 36 victims were killed in terrorist attacks in England. The attacks in Manchester and London led to 45 arrests.

Human rights organizations have complained in recent years about the increasingly draconian anti-terrorism legislation in Britain. Amnesty International said, for example, this year that the British, under their 'Orwellian' measures, undermine human rights.