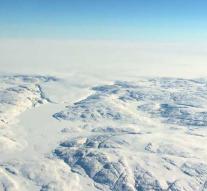 houston - Under the ice of Greenland there is a huge impact crater. It is 30 kilometers in diameter and about 300 meters deep. This makes him one of the larger craters on earth. The impact site was created less than 3 million years ago. Then a meteoroid of hundreds of meters hit the earth.

The crater is located under the so-called Hiawatha glacier in the northwest of Greenland. He is hidden under a pack of ice that is almost a kilometer thick. Danish scientists saw him in July 2015 on measurements of the American space agency NASA. He could see radar through the ice. With other satellites, the Danes were able to confirm the existence of the crater.