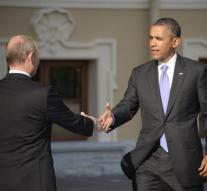 hangzhou - The US and Russian presidents, Barack Obama and Vladimir Putin, speaking to each other on the sidelines of the economic summit of the G20 in the Chinese Hangzhou. This was informed the Russian news agency Tass Sunday from a spokesman for the Kremlin.

The foreign ministers of the two countries, John Kerry (USA) and Sergey Lavrov (Russia), spoke to each other for two hours on Sunday included the civil war in Syria. Which if known yielded nothing concrete. The two Monday again discuss the issue.

The G20 is an economic consultative body of nineteen economically strong countries and the EU. The top of Sunday to Monday is the first G20 summit in China.