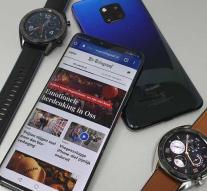 london - The Chinese brand Huawei has not been a small player for a long time. Last week, Bloomberg Intelligence even reported that the brand in the home country had overtaken Apple. Yesterday, Richard Yu presented the Mate 20 Series smartphones and a new smartwatch at the London ExCel Arena. Both with impressive and striking specifications and possibilities.

The Mate 20 is the fifth phone since 2014 when the Mate 7 came on the market. The Mate 20 Pro (999 euros), which we were allowed to take care of in London, has a number of distinguishing features.

The battery (4200 mAh) is quite sturdy and makes it possible to use the Mate 20 as a charger. Place a wireless rechargeable device on the back of the Huawei and the power is transferred. Handy for when someone has forgotten his charger. And do you need power yourself? In thirty minutes your phone is 70 percent full thanks to Supercharge (40 Watt).

The Mate 20 Pro can be opened with a fingerprint. The scanner for the print is processed at the bottom of the screen and thus takes no space. As soon as your finger is in the vicinity, the sensor lights up.

For taking photos, Huawei is the right address. The P20 Pro has been the best for months at the top. With the Mate 20, the black-and-white camera has been replaced by a Leica Ultra-wide-angle lens, so that there is a lot to be seen from very close. Macro photography of objects at a distance of 2.5 centimeters is also possible.

The camera is equipped with the Kirin 980 processor, which with its enormous computing capacity optimizes video, photography and energy management via Artificial Intelligence (AI). Photos with lesser lighting conditions produce startling results just as with the P20.

Fun during the presentation was the 3D Live Emoji. Thanks to the depth camera on the front, the phone can make 3D scans of objects. The scan (in London of a panda) was then converted into an animated Emoji. Via Augmented Reality (AR) the panda was then shown dancing on the stage.

After the phone violence, the bad news of the poor English pronunciation did not follow Richard Yu, the CEO of the Huawei Consumer Business Group, with a new product: the Watch GT. The watch has a bright Amoled HD touch screen with a resolution of 454x454.

Striking is the battery life. The good-looking watch has two chips. One for high-performance tasks and one for the simpler tasks. With average use Huawei says that you do not have to recharge for two weeks. That would be a breakthrough for a smartwatch with so many functionalities and leave the competition far behind. There are two models on the market: the 199 euro cost Watch GT Sport and the GT Classic that costs thirty euros more.

The operating system for the Watch GT is software developed by Huawei itself. ' This way we can better control the performance of the watch, 'says a spokesman in London.

Incidentally, it seems that Huawei with the tough looking Watch GT only focuses on the male customer. Where various fashion brands also tempt women to smartwatches, that is apparently a step too far for Huawei.