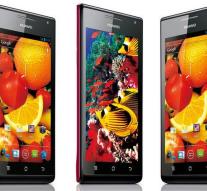 - Chinese technology company Huawei in the first nine months of this year sold more smartphones in Europe, Middle East and Africa than in all of 2015, according to figures published Monday by research firm Canalys.

In the third quarter, Huawei sold in this region for the first time more than 10 million smartphones, representing an annual growth rate of 70 percent. Over the first three quarters came from the sale of 26 million units, bringing the total of all the important holiday season has surpassed last December.