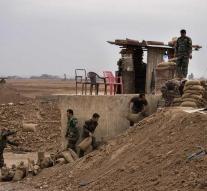 erbil - The Kurdish forces in Iraq have been guilty of the unlawful destruction of large numbers of homes they have conquered IS. This enables the human rights organization Human Rights Watch in a report released Sunday. In some cases involve entire villages, writes the organization.

HRW does its findings based on interviews, satellite images and visits to some twenty villages. It covers the period September 2014 to May 2016 and for the Iraqi regions of Kirkuk and Nineveh.

The organization sees a pattern of destruction, with Arab houses are razed and Kurdish homes are left intact to the ground. Satellite images show according to HRW show that in many cases the houses destroyed months of Kurds have captured the village.