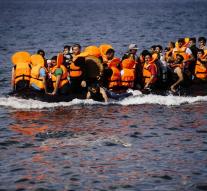 athens - Refugees from Turkey who try one of the Greek islands in the Aegean reach, be attacked by masked men in speedboats. Trying to make the boats with refugees in many ways unusable.

That says Human Rights Watch. The human rights organization says, based on testimony that at least eight such incidents have occurred, the most recent on 9 October. In that specific case the men have the outboard motor of the boat refugees uprooted, says an Afghan who was on board.

They are often armed with pistols. In most cases, they try to tear the outboard, but witnesses also report situations where a refugee boat was sailing up or punctured. Sometimes refugees on board are also abused.

Human Rights Watch said there would be members of the Greek Coast Guard have been involved in the attacks. It is not the first time that messages come out of refugee boats attacked. The American CBS News did already report in September.