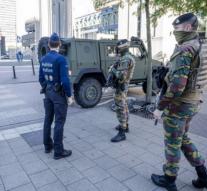 brussels - Police in Belgium have crossed the line on anti-terror measures after the attacks of November 13, 2015 in Paris and March 22 this year in Brussels. Human Rights Watch (HRW) said in a report that Belgium has gone too far in taking counter-terrorism measures. The human rights organization documented 26 cases of violent or discriminatory behavior by the police.

In 26 incidents the defendants reported to HRW that they were harshly or were stopped insulting remarks of the police. In ten cases there was excessive force, in four cases of physical abuse.

HRW claims that the Belgian government adopted a series of problematic laws to combat with terrorism. The organization also mentions the long-term deployment of some 1,800 troops undesirable to support the police. In addition, there have been hundreds of raids and arrests.

One of the measures taken by Belgium in the fight against terrorism is the solitary confinement of suspects. HRW notes that at least 35 detainees covered by the isolation regime. That means the defendants to 23 hours a day sitting in solitary confinement. Some of them sit for ten months fixed that way. 'The prolonged solitary confinement is cruel, inhuman and degrading treatment, which may amount to torture,' the report said.

The organization calls on the Belgian government on the fundamental rights of people not to undermine and addressing police misconduct. 'Disproportionate measures undermine the rule of' concludes Letta Tayler HRW.