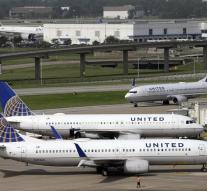 houston - Houston's two largest airports remain close until travelers can be guaranteed a 'safe service'. The George Bush Intercontinental Airports, including the KLM on Airplane, and William P. Hobby were closed after the tropical storm of Harvey caused massive waterfalls.

Among other things, the runways came blank.

'We did not set a deadline,' spokesman Bill Begley said on Monday. 'There is a whole list of things we need to check before we can open the doors. '