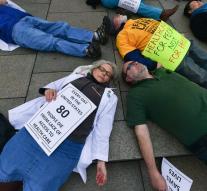 - The Republicans in the House of Representatives want to put a bill on Thursday to abolish the legislation of former President Barack Obama. The decision follows a consultation in which the Republican President Trump has insisted that replacing an amended bill to replace 'Obamacare' will no longer be objectionable.

Kevin McCarthy, the leader of the Republicans in the House, declared Wednesday that there are now enough votes to approve the bill. 'We are going to approve the law,' he said to American media. 'Doing nothing is not an option,' said McCarthy via Twitter. The Republicans must act now because the American people are sitting on a sinking ship called Obamacare.

An earlier attempt to abolish Obamacare failed at the end of March. The bill was then withdrawn just before the vote, because there was insufficient support within the Republican party. Trump had already promised to abolish Obama's health insurance system in his election campaign. However, his replacement care law was a part of Republicans too far and another part not far enough.

After intensive consultation with the president, some conservative members in the Republican party who opposed were declared to vote. If the bill is adopted in the House of Delegates, it has to go to the Senate.

If the new law replaces Obamacare, this means, among other things, the end of Medicaid, the federal program that provides insurance for the poorest Americans.