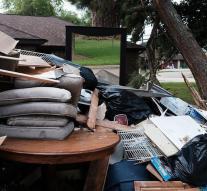 washington - The US House of Representatives released about $ 8 billion (over 6.7 billion) for emergency relief for Hurricane Harvey in Texas victims and for repairs.

The Senate will have to make a decision.

Harvey was the hardest hurricane that struck Texas in a half century at the end of last month and caused tremendous damage to dozens of dead. Especially in and around the city of Houston large wrecks were inflicted as a result of floods. The damage is estimated at 150 to 180 billion dollars.