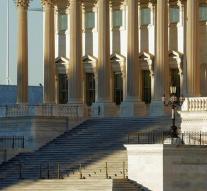 - The Republican Party continues as expected hold a majority in the House of Representatives. Reported that the US news networks NBC and ABC, based on exit polls and first results.

The battle for control of the Senate is a lot more exciting. Republicans now have 54 seats in hand, the Democrats 44, two senators are independent but usually vote with the Democrats.