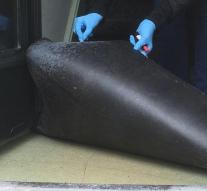 amsterdam - Again, the home of the Forum for Democracy Foreman Thierry Baudet is contaminated. The police say he had been on the spot on Sunday morning at his house at the Korte Prinsengracht in Amsterdam, and Baudet himself confirmed this too. Even now, the front door was polluted, according to the police spokeswoman.

'We have researched and investigate what exactly is the pollution and who made it. In any event, pollution has been observed on the outside. It is unclear whether it has come in, 'said the spokeswoman.

In the house, samples of the door mat and a smelly substance were taken with cotton swabs. Last Thursday, the front door of Baudet was overloaded. Then the action was claimed by left-wing activists calling it the 'Radical Anarchist Feminist Front'.