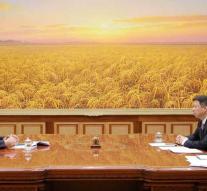 seoul - North and South Korea have a direct hotline between the leaders of the countries. The line was opened a week before North Korean leader Kim Jong-un and South Korean President Moon Jae meet in the Panmunjom border town.

The military hotline was restored in January. The North Koreans closed that telephone line at the border in 2016. This happened after Seoul had decided to stop the work at a joint business park of the two countries in Kaesong.