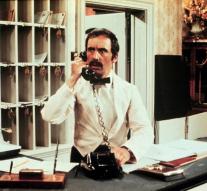 torquay - The Gleneagles Hotel in Torquay in England goes against the plain. Instead there will be a retirement home with 32 apartments. Actor John Cleese spent the early seventies a while in the Gleneagles Hotel with the crew of Monty Python. He did as inspiration for the series Fawlty Towers, in which he plays the busy and clumsy hotel owner Basil Fawlty. Fawlty Towers was elected in England in 2000 as best TV series ever.

Owner of the Gleneagles Hotel was at Donald Sinclair. His way of doings brought Cleese and his then wife Connie Booth (who plays waitress in the series) to the idea of ​​the hotel series. Fawlty Towers made ​​twelve episodes. Cleese described Sinclair, who sold the hotel in 1973, as " the most wonderfully rude man I have ever met ".