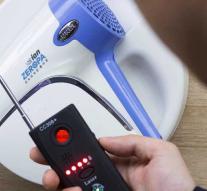 seoul - The South Korean police have arrested two men who filmed illegal hotel guests and broadcast it directly over the internet. According to the police, images of around 1,600 came as a result...

The two presented themselves as fitters and placed cameras in all kinds of places in the hotel rooms such as televisions and hairdryers in 42 rooms at 30 places in the country. The images of unsuspecting hotel guests were distributed over the past three months via a website.

South Korea is under the spell of a scandal around a singer and TV personality who secretly made videos of his sex escapades and then shared them.