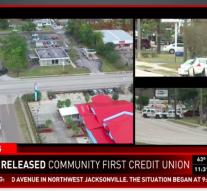 - A bank robbery and subsequent hostage in the US Jacksonville on Thursday ended without casualties. The armed hostage-taker surrendered and eleven people he was holding in the bank, came unscathed.

According to the police was beaten alert local time around nine hours due to a robbery at the bank. Shortly afterwards showed that the robber was holding eleven people. Then the police turned out en masse.

Negotiators of a special police unit were able to stop the man after two hours persuade his action. He was arrested.