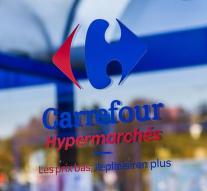 brussels - In Horticultural supermarket in Brussels several people are being held hostage by a man with a knife. It is unclear what his motives.

The man would hijack such vijfttien mesen. An eyewitness tells the VRT that everyone had to be in on the ground.

Police would assume a runaway robbery and not yet of a terrorist act.