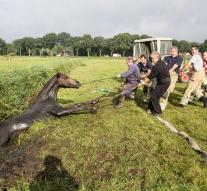 - He does probably nothing, but really nice liked the horse Toto (18) adventure into a deep ditch Eemnesser not. The animal had probably been up all night stood in the ditch and tried in vain to reach dry land before the Blaricummermeent farmer Klaas Vos saw the animal.

Attempts by the farmer to get ashore Tito failed, and the fire brigade was called. By joining forces eventually managed to save Tito. The animal does not appear to have taken ill effects, though the vet found that whilst Tito was quite exhausted.

Tito, owned by the disabled equestrian Gooi and Eemland from Bussum, hopefully with a few hours back on their feet.