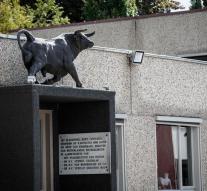 The slaughterhouse came under fire two weeks ago after an undercover video of Animal Rights. The images showed that cattle were hunted with sticks in a box and got electric shocks. The animals could see how other cattle were hanged at their legs and the throat was cut. The slaughterhouse had to close and lose almost all its customers in the days to come.

The company may open again after some measures have been taken. Thus, the staff member to be seen on the images had to be fired. There was also an additional staff member to swallow the animals quickly and only to be slaughtered if an animal welfare officer is in charge of space surveillance.