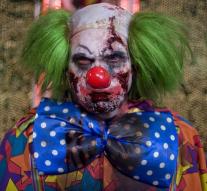 delft - A horror clown who had provided it in Delft on a boy of fourteen was attacked Wednesday night itself. The teen was with his younger brother in the Theresiastraat dogs on a walk when they were harassed by someone with a clown mask and a red wig. The 14-year-old Luc, who practices self-defense sport for almost ten years, the clown gave then some punch.

'I saw him coming and said to my brother:' Do you go with the dogs home, I'll take care of here. ' The culprit, according to the young Delft a man of 1.80 meters with a deep voice. 'I'm going to catch you, he said, and began to beat. 'When Luc directed back hit the terror clown backed off. The boy, whose father owns a gym in Flushing: 'Martial Arts is really important that you see again. I do not know how it was ended. '

To our knowledge it is the first time in the Netherlands that a horror clown getting 'a taste of their own medicine.' The culprit is missing. Presumably he is injured. The boy and his mother did not report and are also not going.

The phenomenon of horror clown, also known as killer clown, has been around a while in the United States, Australia and Britain. The last days surfaced in several places in the Netherlands, horror clowns, including in Almere, Arnhem and Oss.

In Rotterdam Wednesday a killer clown arrested along with a friend. The Rietdijk officers intervened in the Charlois district after a clown with 'what looked like a meat cleaver had' startled passersby. The friend walked around with a camera to film the whole thing. The device is confiscated. The suspects are Rotterdam 21 and 23 years.

McDonald's Wednesday took the clown Ronald McDonald away from the Dutch subsidiaries. Earlier, the fast food chain did that already in the United States. The company likes it because of the evil ilk are not appropriate to show the clown in the branches.