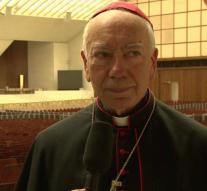 Because neighbors complained about noise, the police decided to intervene. On the spot, several men appeared to have sex with each other.

The priest was arrested and questioned. The apartment belonged to the secretary of Cardinal Francesco Coccopalmerio. His department is jointly responsible for research into sexual abuse by clerks.

According to Il Fatto Quotidiano, the pope would have been furious when he heard the news. The newspaper suggests that he may request to retire to Coccopalmerio.