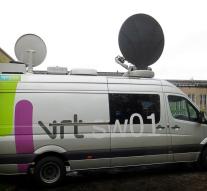 brussels - In the Flemish public broadcaster VRT is throats . The editors of the news has lost confidence in the leadership of the VRT. Possible steps by the editors , another Belgian media reported Thursday . The dissatisfaction grew after public condemnation by directing a journalist after his interview with a former Syrian fighter in the television the appointment on Monday.

The editors sent after the broadcast a press release stating that " the interview does not meet the journalistic standards of VRT News ". The interview would have been too uncritical. The leadership then removed the interview from the website. Censorship was even the slightest reproach of the lead this action.

A new press release ensued, in which trust in the journalist and the program was confirmed. But by many this was seen as an admission of guilt. It has long been at odds since the VRT big cuts hangs over that compulsory redundancies can not be ruled out.