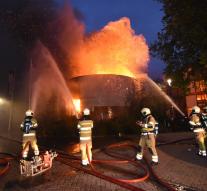 - The emergency services have early Saturday morning seven homes evacuated due to a major fire in Nieuwegein. Other residents are advised to close because of the smoke windows and doors.

The fire broke out around 05. 15 hours. The fire rages in a former dance school at the Erfstede is now a water pipe is situated. The property is close to City Plaza Shopping Centre. 'It is still unclear what effect it has on the mall,' said a spokesman of the security. The fire late controlled burn fire. It will take until the afternoon before the fire is out.

Local residents who have to leave their homes, are collected in a care center. To our knowledge no injuries. About the cause of the fire is still unknown.