Home / World / Homeless bank robber would like to cell in 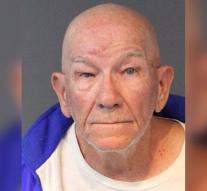 reno - 78-year-old Tommy Ray McAdoo has to file the cell for a bank robbery that he committed at the end of 2016 and is happy with it. Indeed, the homeless claims to have committed the robbery with the sole intention of being stopped again in the cell.

McAdoo had a criminal career covering about 50 years, including five previous convictions for robbery, so the New York Post knows. For the last eight years he lived on the side of society, without a permanent residence or residence.

In order to put an end to it, he entered a bank branch in the fall of 2016 with a knife and demanded money. He went off with about $ 2,000 but did not get far. McAdoo himself known his act.

His lawyers describe McAdoo as a sick homeless man who no longer wanted to live in the cold but wants to go back to prison. The lawyers ask for a light verdict, McAdoo can get up to 25 years of cell. The question is what is preferable.