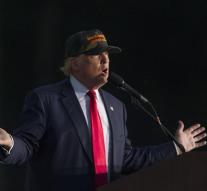 hollywood - With less than two weeks before America goes to the polls is Wednesday Donald Trump's star smashed on the Hollywood Walk of Fame with an ax.

The man who destroyed the star, disguised himself as a construction worker and to hit in the early morning. The perpetrator did not destroy the star, according to the US website Deadline own words, but remove to auction him then. Proceeds he would like to give to the women who have been sexually harassed by the Republican. Whether the man was arrested, is not clear.

It is not the first time that Trump's star has just news. In July, an American street artist placed a small wall around the star, referring to Trump's plan to build a wall along the border between Mexico and the US there was previously a petition created to remove the star. Although there are enough signatures were collected, the Chamber of Commerce in Hollywood put a stop to that.