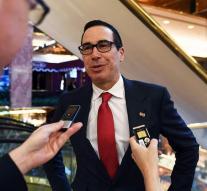 - The future US president Donald Trump Hollywood Financier Steven Mnuchin on the eye as the new finance minister. Reported the New York Times who relies on sources close to the presidential transition team.

The appointment of Mnuchin as a minister in the government of Donald Trump would be announced Wednesday.

Mnuchin was the finance guy in the campaign of Donald Trump has made a career as a financier in Hollywood and Wall Street. He began his career as an investor at Goldman Sachs, where he became a partner. Then he put his own mutual fund. So he financed films like X-Men and Avatar.

The choice of Trump Mnuchin is remarkable because the Republican in his campaign had turned strongly against the CEO of Goldman Sachs which he saw as the personification of a global elite ' has robbed our workers. '