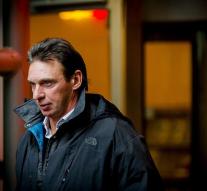 amsterdam - 'Unsurprised and inappropriate.' That is what attorney Sander Janssen finds of the statements made by the Amsterdam court in late June about his client, Willem Holleeder.

The criminal case against Holleeder will not start in the beginning of 2018, but the court found him on the day of the decision in the liquidation process, Passage, to blame for Kees Houtman's murder in 2005 and membership of a criminal organization involved in murder. While Holleeder did not even pass in Passage.

The judgments of the court also arouse liberation in circles of criminal justice experts. For the verdict in Dino Soerel's case, it was unnecessary to refer to Willem Holleeder's debt, too. In fact, it is at odds with innocence presumption: the principle that everyone is innocent until debt is shown.

The court emphasized that the findings only have consequences for Soerel, because the court still has to judge Holleeder. Nevertheless, Janssen, who assisted Jesse R. in Passage, was living with astonishing surprise. 'The court has not been able to resist temptation to show muscular balls. You should say that you must first hear someone's defense before you condemn him. '

The rulings of the court are discussed today at the twelfth preparatory session in the case against Willem Holleeder. Janssen and his colleague Robert Malewicz have never before experienced that a court of appeal has ruled on a suspect about whose debt a court still has to judge.

The court found itself a bit crazy, as evidenced by the judgment, but did not say it was to be avoided. The cases against Dino Soerel and Holleeder were intertwined with the fact that the court had to make statements about the role of Holleeder with all sorts of observations about Soerel.

Malewicz does not see that inevitability: 'In the verdict about Dino Soerel, the court did not have to call man and horse, but did. That will be a strange thing. '

The substantive treatment of the criminal case is scheduled for early 2018.