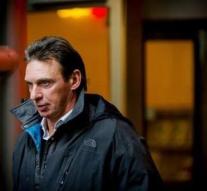 amsterdam - Willem Holleeder is afraid he has already been convicted before the court heard his defense. That he said this morning at a brief, twelfth preparatory session in his case in the Amsterdam court.

Holleeder bases his fear of the continuous leak of information from witnesses in his case, and the judgment that the Amsterdam court in late June was in the liquidation case Passage.

The leakage of information is aimed at influencing the court and other witnesses, says Holleeder. The consequences for his process are difficult to overlook, he says. This is all the more because the court in the case in Passage verdachte Dino Soerel's case also stated that Holleeder is guilty of killing Kees Houtman's murder in 2005 and on membership of a criminal organization. 'The court has already sentenced me before your court heard me. '

According to Holleeder, it has also been found that the witness who reported that he estimated a murder attack on his sisters from the Extra Protected Institution in Vught, has lied. The witness said that because he hoped the government would then help him build a new life on Curacao.

The Public Prosecutor says something different to think about. The suspicion of launching a murder attack serves as supporting evidence, and so remains, so a spokeswoman.