Home / World / Hollande: We were slow 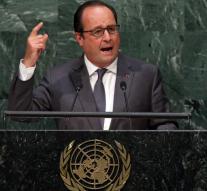 strasbourg - Europe was slow to recognize that the tragedy in North Africa and the Middle East also had an impact on Europe . That said, French President Francois Hollande Wednesday during a speech at the European Parliament in Strasbourg. He was referring specifically to the problems in this region that led to massive fled , with Europe as final destination.

"I have to admit that Europe was slow to recognize that the tragedy would affect us have", Hollande said.

"Refugees were looking for light, Europe was not that light". He added that Europe "last" has prepared a plan to absorb the large numbers of refugees to Europe and to deal with migration issues.