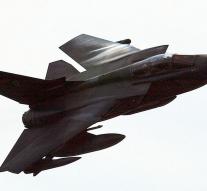 - France expects more support from Germany in the fight against terrorist organization Islamic State (ISIS) in Syria and Iraq. That said, French President Francois Hollande on Wednesday at a joint press conference with German Chancellor Angela Merkel in Paris.

" If Germany can do more, that would be a very good signal ", he said. Concrete demands Hollande did not disappoint. Recently, even speculated about a possible deployment of German Tornado reconnaissance aircraft. Merkel said she will think about how Germany could do more in the fight against terrorism. Merkel : " This is our duty and we will quickly respond.

" MaliHollande welcomed in any case the German willingness to send more troops to the West African nation of Mali, in order to relieve the French forces there in the anti-terror struggle.

The French Air Force has been pursuing for over a year attacks on ISIS positions in Iraq as part of a coalition led by the US. Since September, France also focuses on targets in Syria.