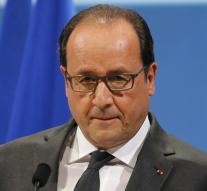 - The popularity of French President Francois Hollande was in the last three years never as high as today. The confidence of the voters in Hollande increased significantly by the measures he took after the attacks in Paris. This emerges from a poll published Tuesday.

Confidence in the president jumped from 15 percent in November to 35 percent in December, equivalent to the level in December 2012. The Socialist Hollande was elected in May 2012. The bulk of his mandate, he was the least popular of French presidents. Now he does it better than the conservative ex-president Nicolas Sarkozy at the same stage of his term of office.

However, a small leap of his popularity after the attacks in January on Charlie Hebdo was short-lived. This suggests that the current support in the longer term may ebb again in the run-up to the elections in 2017.

What is helping is not that the French unemployment rate for the first time since 2007 is higher than the eurozone average, according to data from statistics agency Eurostat. Additionally, 63 percent of respondents in the poll in December, he continues to have no confidence in him.