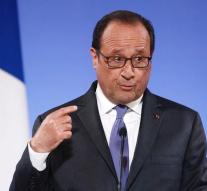 - The Turkish military intervention in northern Syria could lead to an escalation of the war there. Before that French President Hollande warns that evokes all the warring factions to lay down their arms and resume peace talks.

After the Russians a year ago are now the Turks who have made the choice to deploy their army on Syrian territory in the fight against IS, Hollande said Tuesday at a meeting of French ambassadors. 'These multiple, conflicting interventions carry risks of escalation with it.'

Hollande said to have understanding for the fight against the terrorists, given the attacks that had endured Turkey recently. Turkey is, however, also in Syria Kurdish troops to that IS fight with France.


Furthermore, the president said that Moscow should not close its eyes to reports of attacks with chemical weapons arid the Syrian government. He asked for help from the Russians in the drafting of a resolution in the Security Council condemning the attacks.