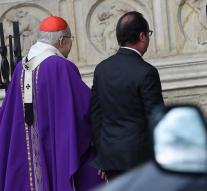 - French President Francois Hollande attends at the beginning of Wednesday in Notre-Dame-de-Paris Mass in memory of the priest Jacques Hamel, on Tuesday in Saint-Etienne-de-Rouvray was killed by terrorists.

The archbishop of Paris, Cardinal André Vingt-Trois, and the archbishop of Rouen, Dominique Lebrun, are among the clergy during the church service. There are approximately 1,500 people are expected including many dignitaries.