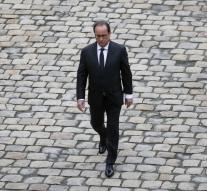 - French President Francois Hollande has thanked the King of Morocco Friday for the "effective assistance " after the attacks of 13 November in Paris. He did so at a meeting in Paris, said in a statement.

The Moroccan intelligence tipped the French colleagues about the whereabouts of terrorists in Saint-Denis. That led to a police operation in the Paris suburb where three suspects were killed and eight people were arrested.

The aim of the operation was the arrest of Abdelhamid Abaaoud, a 28-year-old Belgian extremist who is seen as the driving force behind terrorist attacks, including those on 13 November in Paris. He is slain Wednesday.