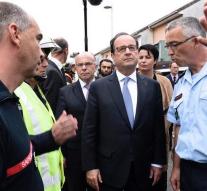 - French President Francois Hollande called after the murder of a priest Tuesday with the pope and promised to do everything to protect churches in France. If a priest is attacked a wound for the whole of France, Hollande said.

The president also expressed the hope that,, this painful and depressing circumstances harmony defeats hatred, '' said a statement from the Elysee.

Two men attacked earlier Tuesday a church in Saint-Étienne-du-Rouvray and cut the throat of the priest through. The perpetrators were shot dead by police.