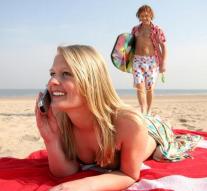 amsterdam - The abolition of roaming charges in the European Union had to make it possible for holidaymakers to get Netflixen undisturbed. But with many tourists, the measure makes for stress. They can now be harassed by the boss throughout Europe.

Nearly a quarter of respondents in a Motivaction survey report that the new EU rules make the atmosphere of travel less good this summer than otherwise. One in ten had a 'communication stress' on holiday.

The results are completely logical, says Jan van Dijk, professor of communication science at the University of Twente. 'The new rules offer great possibilities, but maybe it's getting too much. '

Roemer Visser, occupational psychologist at TIAS Business School, calls the results regularly 'worrying'. 'The net result of being more online is negative. People think they can do their mail in between, but need a lot of that time to focus again. Whether it's work or a family holiday. '

People are by no means able to reduce their app and email behavior on holiday, says Van Dijk. 'With each new message, the brain separates dopamine- a lukewarm hormone. Ultimately, you'll be at home as often on your phone, and you even get argue with your partner. '

Then it's too late, because a continuous beeping phone makes us never really feel like a holiday. The feeling that comes in place- always being lived by your work- is the highway to a burnout.

The planning should also take place throughout the year, according to the professor. 'You should take deliberate and drastic action against overcommunication. Tackle everything, and then put the pit a little lower during the holidays. '

Visser thinks we need to get rid of the 'digital chain' of email and app traffic. 'It can not be that the whole system collapses if you are unreachable for a week. '

Van Dijk checked the mailbox only once a day. 'And that's still good, right. But I better my life: I used to look at my email three times a day. WhatsApp and the like, I quit. '

Staffing the right to be unreachable, as the French government started this year, could also be a solution, says the professor. 'Not by the government, but for example at the cao tables. Trade unions should organize themselves. '