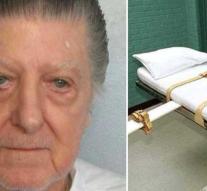 montgomery - The Supreme Court of the United States dismissed the appeals against the execution of an 83-year-old man in the state of Alabama. A few hours earlier the court had temporarily suspended the execution of Walter Moody to study matters. Why the judges rejected the appeal cases, they made no further known.

Moody sent a bomb by mail to a judge in 1989, who lost his life as a result. Later he also sent a fatal bomb package to a civil rights lawyer. When the sentence is passed, he becomes the oldest person to be killed since 1976, the year in which the Supreme Court reversed the national suspension of the death penalty.

Lawyers have asked the Supreme Court to save Moody's life because his case has been moved from a federal judge to that of the state of Alabama. In the first case, he was given life for seven times. According to the lawyers, that statement must apply.

Lawyers from the state of Alabama responded by saying that the federal government had agreed to the transfer of the case. Alabama therefore has the right to carry out the death penalty imposed on Moody by a judge in the state. Moody has been on the death row for more than twenty years.