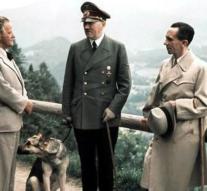 munich - A notable auction on Saturday occurred at auction house Hermann Historica Munich. Such auction 169 pieces from World War II went under the hammer, including a tunic of Hitler and an X-ray of his skull.

The jacket Hitler gave 275. 000 and the X-ray 21. 000. The buyer of the uniform jacket was a man from Argentina who wanted to make his name known. The man, about forty years, Ralph Lauren polo shirt and cap bearing, bought a total of 56 Nazi stands for 600. 000. It would not go to a private purchase but an investment for a museum. Which museum, he left secret, the Bild Deutschland reported.

Butts also found the watch of Nazi leader Hermann Goering, which yielded 42 000, the gifcapsule with a broken bottle of Goering worth 26 000 euro and the nightshirt and underpants of the leader for 3000 euros.

The old pieces from the Second World War came from a private collection of John K. Lattimer, who died in 1992. Lattimer collected as a boy objects of naval, aviation and Native Americans. Later he expanded his collection with historical figures such as George Washington, Napoleon and John F. Kennedy.