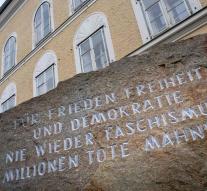 - The birthplace of Adolf Hitler in Braunau am Inn falls prey to demolition. Austrian Interior Minister Wolfgang Sobotka will find that most an explanatory sign may come in the new building, nothing more.

Sobotka is following the advice of a commission. is on the site of the old building or a social institution or a community organization. Thus, each memory eliminated the dictator. Hitler was born on April 20, 1889 in the old building. He died in his bunker in Berlin on April 30, 1945.

For years the house was subject of struggle between supporters and opponents of demolition. Many neo-Nazis came to Braunau to be photographed at the house. The Austrian authorities wanted to 'pilgrims function long off.

The young Hitler spent his first year in the house by. It's been empty for several years now. The last word is formally to parliament in Vienna, which must approve the plan.