Home / World / 'Hitchhiker turns after some days no elevator' 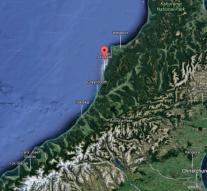 - "A French hitchhiker who had tried unsuccessfully for days to get away from a remote part of New Zealand, has lived out his frustration on road signs and pedestrians. The New Zealand Herald reported Tuesday that the 27-year-old Frenchman in Punakaiki, about 300 kilometers southwest of Wellington, for four days had no elevator to get to know and got all of the tortoise."

"He scolded passersby and destroyed, among other signs. He also threw large stones. Police stopped the man on Monday, after which he was to appear Tuesday in court in Greymouth. From the perspective of the lifter was already big step forward: Greymouth is a relatively large town on the west coast of the South Island and has excellent connections to the rest of the country."