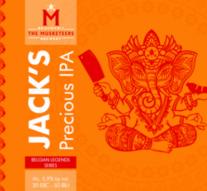 - A label with the image of the Hindu god Ganesha on Belgian beer bottles Shoot down the wrong way by Hindus. The use of Hindu deities for commercial purposes is offensive to believers, according to the Universal Society of Hinduism, which claims to represent Hindus worldwide.

The label Ganesha showed a knife and a sausage in his hands and his head is the brewery label. 'Ganesha is deeply revered in Hinduism and must be worshiped in temples or shrines in people at home, and not be used for commercial greed to sell beer,' Zed argues. 'Ganesha connect to an alcoholic drink is also very disrespectful. '