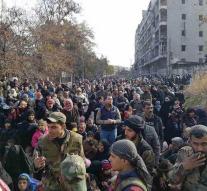 geneva - Rebels in the besieged eastern city of Aleppo impede flights and abusing civilians civilians in their fight against government forces. The United Nations reported Friday. In the area that jihadists and rebels still held in the eastern Syrian city are still 100,000 citizens.

The UN also reports that hundreds of men who have gone out of the besieged district to the government area, are now missing. The UN fear that they will be detained and possibly tortured.

The Russian authorities reported Thursday that 8,000 civilians have fled the besieged town. That was possible because the Syrian troops carried out a unilateral file.